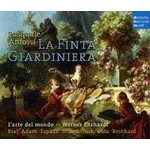 La finta giardiniera was a resounding success: after the first performance 1774 in Rome, the opera was translated into several languages and staged in many other European cities and inspired Mozart to write an opera of the same title. This world premiere recording by the ensemble l'arte del mondo shows the exceptional skills of this little-known composer. The Spanish Catalan soprano Nuria Rial is famous for her shining, crystal clear and beautiful voice and is one of the best baroque voices for baroque arias. She was described as "a silvery sounding voice, as clear as a bell." (Opernglas) The orchestra l'arte del mondo is rooted in the Early Music tradition, but also plays on modern instruments with the same passion, performing repertoire that goes up to the Romantic period. Since it was founded, the ensemble has been invited to appear at many major festivals and concert series such as the Ludwigsburg Schlossfestspiele, the Bonn Beethoven Festival, the Schwetzingen Festival and the Sanssouci Music Festival in Potsdam.