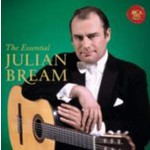 Released to celebrate the 80th birthday of the charismatic British guitarist and lutenist, Julian Bream, CBE.

This special 2-CD collection reflects the vast variety of music that Julian Bream has championed, ranging from such popular Spanish classics to some of the forgotten Elizabethan gems he restored to circulation.

Includes his own editions and arrangements of works by Albéniz, Boccherini, Falla, Granados, Handel, Paganini and Vivaldi, as well as examples of his famous collaborations with such fellow artists as the tenor Robert Tear and actor Peggy Ashcroft.

Dowland:
The King of Denmark, His Galliard
Frog Galliard

Torroba:
Sonatina in A major for solo guitar: Andante

Villa-Lobos:
Prelude No. 1 in E minor

and excerpts from works by JS Bach, Kohaut, Giuliani, Sor and Villa-Lobos

The Last Night of The Proms