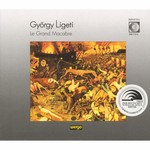 Ligeti's two-act opera in four scenes, Le grand macabre, is an entertaining, taut example of musical theater residing somewhere between parody and ominous seriousness, between clowning and wisdom. The opera's hero, Nekrotzar (Dracula), alias Le grand macabre, has not only ambitions to suck blood but also apocalyptic visions: he wants to bring about the end of the world personally (but fails to do so).