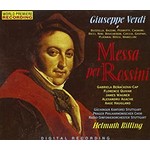 After an imposed slumber of over 100 years, the score to the "Messa per Rossini" received its premiere performance in 1988 in Stuttgart under Helmuth Rilling. hänssler CLASSIC released the recording in 1989 in cooperation with the SWR broadcasting company and earned outstanding critical acclaim.

The hand-written score of the requiem mass in remembrance of Gioacchino Rossini, a work of almost two hours' duration featuring five soloists, choir and a large orchestra, was completed in 1869, written by thirteen composers. At the suggestion of its initiator Giuseppe Verdi, the mass was to be performed at least once, in Bologna. However, the undertaking failed for organizational, financial, ideological and political reasons.

hänssler CLASSIC aims to demonstrate the importance of this work for the world of music by re-releasing the recording. It is the sole recording of this work in the world and is of particular interest since it provides a collection of music by various Italian composers, many of whom have sadly and all too wrongly been neglected.