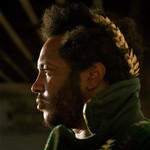 Forever a wildcat and wild card, Los Angeles' bassist/songwri­ter/vocalist Stephen Bruner, aka Thundercat, is impossible to tame artistically. A true master of his craft, he can be found playing bass with Flying Lotus, Erykah Badu and Suicidal Tendencies, in the same breath as performing live with the likes of Stanley Clarke, Snoop Dogg or the Red Hot Chili Peppers. His 2011 solo debut ('The Golden Age of Apocalypse,' co-produced by Flying Lotus) created an equally genre-blurring enigma of indie rock and jazz, with a touch of electronica.

On his second album, 'Apocalypse,' Thundercat pairs up with executive producer Flying Lotus to pull the veil back and reveal the simple truths of the cycle of life, for all its beauty and destruction. From the deep, rumbling entrance of 'Tenfold,' each of the 12 tracks coalesce with Thundercat's sig­nature bass, his riffs and basslines gliding skyhigh to meet Fly Lo's astral touch.