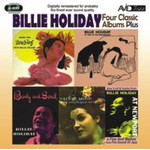 AVID Jazz here presents four classic Billie Holiday albums plus, including original LP liner notes on a finely re-mastered and low priced double CD.
"Body and Soul", "Billie Holiday At Jazz At The Philaharmonic", "Music For Torching" and "Velvet Mood", five tracks from "Ella Fitzgeralnd & Billie Holiday at Newport" plus one track from the album "The Sound Of Jazz" featuring three of the greatest sax players in jazz history, old flame Lester Young, Coleman Hawkins and Ben Webster!
What can we say about Billie Holiday that has not already been said before? Coming to prominence in the 1930's where she played with the Teddy Wilson band in 1935, went solo in 1936, joined Count Basie in 1937 and finally Artie Shaw in 1938 before finally stepping out on her own again as one of the greatest jazz singers who ever lived! There is something about her voice that sets "Lady Day" apart from any of her contempories, or indeed anyone who tried to follow in her giant footsteps. Perhaps it was her tough upbringing, playing in the small bars of Harlem (including a spell in a brothel), that gave her voice that special anguish, pain and sadness, a yearning for something or someone better in her life. Our four selections, plus, cover a ten year period in the career of Billie Holiday, from 1945 where she is captured live at the Philharmonic Hall, through to 1957 where she is again captured live at the Newport festival. We stop off in 1955 to listen to two studio albums "Music For Torching" and " Velvet Mood" and fast forward to 1957 for "Body and Soul" before taking our seats at Newport to listen to a 42 year old veteran carrying the weight of a troubled life in every word she sings. To these ears, Billie Holiday was to jazz singing as Marvin Gaye was to soul singing. There are many great jazz and soul singers in the world but no one sounded quite like these two. They carried the pain and anguish, sorrow and fear of their lives in the heartbreaking way they sang their songs. No one else comes close!
All four albums plus have been digitally re-mastered for probably the finest sound quality ever!