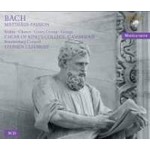 Recording made in 1994 in the chapel of King's College, Cambridge.

First-rate line-up of singers, with one of the great choirs of the world.

'The choir of King's College are on top form throughout…so, too, are the excellent obbligato performances from the Brandenburg Consort.' Gramophone 2003

Bach composed his St Matthew Passion in 1727. Only two of his five Passion settings have survived - the St Matthew and the St John. The St Mark survives in a realisation after the manuscript was destroyed in a bombing raid in the Second World War. Of the other two works there is no trace. The work was premiered in Leipzig where Bach was kapellmeister at the Thomaskirche. Revised several times by the composer, it was often performed during his lifetime, but not heard outside Leipzig until 1829 when Mendelssohn performed an edited and modified version in Berlin. Today we take a dim view of the 19th century tampering with a work like the St Matthew Passion. However, Mendelssohn's pioneering work in bringing the music of Bach to a wider public was responsible for the reappraisal of the composer, and the restoration of masterpieces such as the St Matthew Passion to the repertoire.