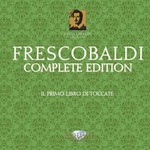 A release of great importance: the first time CD-issue of the Complete Works of Girolamo Frescobaldi. The importance of Frescobaldi cannot be overrated: the Italian Renaissance master influenced a whole generation after him in the development of instrumental composition: his magnificent keyboard works are rich, virtuosic and grand in form, and have served as model for many composers after him (Froberger, J.S. Bach, Purcell, to name a few).

The CD's in this edition are all newly recorded, by the foremost scholar/musicians of Italy, using period instruments.

Frescobaldi was the most influential composer for keyboard in Italy prior to Domenico Scarlatti. Bach copied out Frescobaldi's Fiori Musicali, and he was also a strong influence on Fux and Buxtehude. His reputation has been slow to gain its rightful status over the past century or so.

This edition provides a superb opportunity to discover this neglected master of the Baroque. The project is masterminded by the harpsichordist and organist Roberto Loreggian, and previous individual volumes of the series have been well received. This is there first ever complete edition of Frescobaldi's music to be issued: a landmark on record, sure to be widely noticed by the musical press.