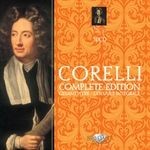 It may seem surprising: can 10 discs really contain all of Arcangelo Corelli's output? They can, and do, but the surprise is merited, for the influence and reputation of these works far outstrips their quantity (and how often can one say that of a Barock composer!). On display here is the apogee of Barock form as displayed in the genres of Solo Sonatas, Trio Sonatas and Concerti Grossi, full of sparkling virtuosity and an intimate knowledge and love of the violin and its potential as a solo instrument.

The influence was felt most immediately in Rome, where he was based for his adult life, but publication of these collections soon earned him a name across Europe, as much as his prowess as a solo violinist did; for this was the golden age of the composer as creator, when composition went hand in hand with performance. Of course there is plenty more music Corelli composed which hasn't survived, or at least not on manuscripts with his name on them, for Corelli as an impresario frequently staged oratorios to which he would have contributed sinfonias and instrumental numbers.

What survives is never less than highly polished; often bold, and continually inventive, as is more than evident in these performances from a welcome and uniform perspective by a leading Dutch period-instrument ensemble. And it's unique; there is no other Corelli box on the market, nor has such a project ever been attempted before or since.