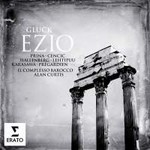 Alan Curtis, described by the New York Times' as "one of the great scholar-musicians of recent times", conducts a brilliant cast including Sonia Prina, Ann Hallenberg, Max-Emanuel Cencic and Topi Lehtipuu in the original, 1750 version of Gluck's Ezio, described by Curtis as "from a dramatic point of view, perhaps the finest of Gluck's pre-Orfeo operas".

Alan Curtis, described by the New York Times' as "one of the great scholar-musicians of recent times", feels that Gluck's opera Ezio is "from a dramatic point of view, perhaps the finest of Gluck's pre-Orfeo operas." This recording presents the original version of Ezio, which received its premiere in Prague in 1750, some 12 years before Gluck's revolutionary Orfeo ed Euridice was seen in Vienna.

Written to a libretto by the prolific and influential Metastasio, Ezio exemplifies the formal opera seria that Gluck sought to leave behind with his so-called reform operas such as Orfeo and Alceste; but after Orfeo's epoch-making premiere in Vienna in 1762 he revised Ezio for performance at the city's Burgtheater in 1763.

"Gluck's revisions to Ezio were not motivated not by any dissatisfaction with the work itself, but by the larger size of the Burgtheater and the concomitant need for a larger orchestra," explains Alan Curtis. "Ezio is one of Metastasio's most dramatic operas. It is also one of the few with a plot totally lacking any absurdities or situations which modern listeners could find difficult to accept. An unfortunate aspect of the later version is the omission of the magnificent aria for the tenor, Massimo - 'Se povero il ruscello'. Gluck had adapted it for Orfeo, where it became 'Che puro ciel', so the Viennese public already knew it too well. We are especially happy to be able to include it in this new recording, sung magnificently by Topi Lehtipuu."

Curtis provides illuminating insights into Gluck's place in operatic history. "For a while during the twentieth century, Gluck was almost reduced to being a one-opera composer: the composer of Orfeo. One could even say that he suffered from too much praise as the reformer, the saviour of opera -- integrating the chorus into the action, liberating opera from the da capo aria and from solo virtuosity. But these days solo virtuosity and da capo variations are very much back in fashion, and people have come to realise that, especially in the first half of his mature years, he was also a master of this 'old-fashioned' seria style."

Until now, Curtis' operatic recordings for Virgin Classics have focused on Handel, with Berenice and Ariodante as the most recent additions to his discography of the composer's works. Gramophone has said that "Alan Curtis has done more than most to prove that many of Handel's 42 operas are first-rate music dramas", while the BBC Music Magazine has praised him as "a seasoned Handelian who has contributed, perhaps more than anyone now, to the composer's operas on disc." How, though, does Curtis view the relationship between Gluck and the older Handel?

"Gluck no doubt respected Handel," he says, "though there is no direct evidence that he learned anything from him -- and certainly no example of his stealing any ideas. Unfortunately, the respect was not mutual. It is said that Handel remarked, after Gluck's visit to London, that his cook knew more about counterpoint than Gluck! Coming from the world of Handelian opera, one is first of all struck by the simplicity of much of Gluck's music -- a simplicity which can be mistaken (as it no doubt was by Handel) for a mere lack of complexity or even lack of skill. But Gluck's music is much more revolutionary than that. It was a way of changing the musical language of the time, and of concentrating on dramatic situations and bare emotions: in short, a way of reforming opera, a process that Gluck and others began long before the appearance of Orfeo in 1762.

"Fortunately for us today, one does not have to choose between these two styles of opera. One can appreciate both. As I work with instrumentalists as singers, not only do we find it refreshing to approach a different style with different criteria, but we sometimes thereby discover new modes of expression. Listen, for instance, to the mezzo soprano Sonia Prina as Ezio, singing 'Ecco alle mie catene' near the end of Act II. She is justly famous for her lively, virtuosic Handelian coloratura, but while her Handel can astonish, her Gluck can move you to tears."

"It's an opera full of coloratura showcases, sophisticated harmonic ideas and great theatricality. Under Alan Curtis's expert direction the playing is sinuous and spirited, and most of the singing forthright and virtuosic - though Topi Lehtipuu steals the show with his honeyed Se povero il ruscello" The Times, 3rd September 2011 ****

"While the libretto by Metastasio suggests a conventional opera seria, anyone looking for a foretaste of Gluck's poetic late style will not be disappointed." Financial Times, 3rd September 2011 ***

"[Curtis] goes about his missionary work with the same combination of scrupulous attention to scholarly detail and finely honed dramatic nous already familiar from his Handel recordings." The Guardian, 15th September 2011 ***

"Curtis's prima donna and primo uomo are the clinchers, with Sonia Prina a wonderfully affecting Ezio and the musically impeccable Ann Hallenberg as his beloved Fulvia. Topi Lehtipuu is a bland villain, but sings stylishly." Sunday Times, 18th September 2011

"Don't worry about the plot: the music is glorious." The Observer, 2nd October 2011

"What it reveals may surprise listeners. Though couched in the classic opera seria mode of the time...it shows that, like Handel [Gluck] could imbue the traditional form with drama...the succession of vast, ornate da capo arias is vividly characterised by many distinctive touches. All the principals shine...The band is neat and precise, and Curtis highlights the work's musical strengths with skill." BBC Music Magazine, December 2011 ****

"Curtis conducts with mingled elegance and fire, pacing the drama expertly and drawing vital playing from his period band (not least the first oboe, crucial in Gluck) that goes beyond mere good style. His cast, several of them Curtis regulars, are shrewdly chosen: youthful of tone, stylistically aware and always intensely alive to the meaning of the text, in aria and recitative." Gramophone Magazine, November 2011

"Contralto Sonia Prina is superb in the title role...velvety-voiced in her lugubrious aria at the start of Act 1, fiery and intense in the quick-fire "Se fedele mi brama"...a committed and nimble account, recorded at and after a public performance in France in 2008, which makes a highly persuasive case for Gluck's neglected operas." Graham Rogers, bbc.co.uk, 5th December 2011

"[Hallenberg is] a paragon of style, taste and musicianship." International Record Review, October 2011