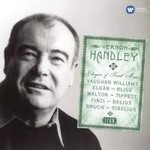 Vernon George Handley was born in Enfield, London, in 1930. He disliked his first names and preferred to use the nickname Tod, given to him as a baby because he toddled along with his toes turned inwards.

Handley was a great champion of British music. His first recording, made in 1965 for a minor record label, was of Bax's Fourth Symphony with the newly-formed Guildford Philharmonic Orchestra. He then went on to record for Lyrita, another small independent company specialising in British music. In the early 1970s Handley started to record for Classics for Pleasure and went on to make many more recordings for both CfP and the main EMI label.

Probably because his professional appointments were nearly all in the UK, and the fact that he put great emphasis on performing British music, his reputation abroad wasn't as great as it deserved to be. He also devoted a great deal of his time to promoting the careers of young, up-coming, British musicians.

This set of 5 CDs showcases recordings of Handley conducting five of the UK's great orchestras. It was in 1984 with 'Tod' Handley that a 28-year-old Nigel Kennedy made his début recording of the Elgar Concerto, here heard on disc one. The first three CDs in the set comprise works by English composers; the other two illustrate Handley conducting two great concertos from the standard repertoire, both with Tasmin Little, and some charming Fauré and popular Russian music.

"Tod" Handley was a self-effacing, modest man who, nevertheless, did not suffer fools easily. This is illustrated no better than in his acceptance-speak at the 2007 Classical Brit Awards when he received the Lifetime Achievement award. A video of this is well worth seeing on YouTube. Handley died the following year.

Mussorgsky:
A Night on the Bare Mountain
Hallé Orchestra

Walton:
Variations on a Theme by Hindemith
Bournemouth Symphony Orchestra