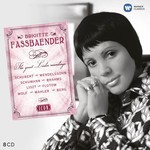 Fassbaender was born in Berlin, the daughter of screen actress Sabine Peters and the baritone, Willi Domgraf-Fassbaender. The family settled in Nuremberg after World War II. She spent her early career in Munich.

Fassbaender studied singing with her father, at the Nuremberg Conservatory. She joined the Bavarian State Opera in 1961, where her first leading role was Nicklausse in The Tales of Hoffmann. Fassbaender sang Octavian (Der Rosenkavalier) in Munich, in 1967, the role that launched her international career. In 1971, she sang at Covent Garden and made her Metropolitan Opera debut in 1974. Fassbaender's first love was not music, but theatre. "I was obsessed by the theatre and wanted to be an actress like my mother."

In addition to her operatic work, Fassbaender has performed in the concert hall as a Lieder singer and in movies, singing the role of Prince Orlofsky in the 1984 film production of Johann Strauss's Die Fledermaus.

Her recordings range from operas, vocal works with orchestra, to Lieder, including Schubert's 'Winterreise' and 'Schwanengesang', oratorios such as Bach's Christmas Oratorio and Handel's Messiah, and also speaking roles after her retirement from singing. She has appeared in numerous televised opera productions now available on DVD, such as her signature roles Octavian and Orlofsky, both conducted by her frequent collaborator Carlos Kleiber. (Wikipedia)