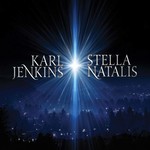 "As a composer, he recognises no boundaries - musical, commercial, geographical or cultural. His is a way of thinking and composing that is perfectly in tune with the spirit of the times." Classic FM Magazine

Karl Jenkins, the classically trained master of global 'crossover,' has composed a new work for choir and orchestra, Stella natalis, as a gift to music lovers of all stylistic and spiritual backgrounds for the 2009 holiday season. Its coupling, Joy to the world, features arrangements by Jenkins of carols from around the globe in keeping with the composer's inclusive and universal approach to the message of music.

The performers represent a mixture of classical and popular artistry. "It has been a privilege," said Karl Jenkins recently, "to feature the astounding talents of fellow EMI artists Kate Royal [soprano] and Alison Balsom [trumpet] and to introduce BBC Radio 2 Young Chorister of the year 2008, Alice Halstead. The choir is Tenebrae, whilst as a counterpoint to their 'classical' sound, I have revisited my past and re-introduced the ethnic sound of Adiemus, featuring Mary Carewe, who sang on the first Adiemus album Songs of Sanctuary, and Mae McKenna. My orchestration has the usual classical and ethnic percussion mix, the latter played by Jody K Jenkins and Zands. The orchestra is the Marylebone Camerata, a hand-picked group of the finest young players in London, assembled by cellist Jonathan Byers."

"Stella natalis means 'star of birth' or 'star of origin,' continues Jenkins, "and the music conveys the Christmas message of peace, goodwill, compassion and a new beginning whilst using a wider palette of inspiration than is usual in such treatments: Zulu text, reference to Hindu gods, as well as the Old Testament, all make an appearance! The libretto, for the most part, is by Carol Barratt together with some established text in Latin and English."

Joy to the world consists of a set of idiosyncratic arrangements by Karl Jenkins to carols from England, Germany, France, Spain, the West Indies and the African-American Go tell it on the mountain.

Alison Balsom (www.alisonbalsom.com), the highly acclaimed trumpeter, is one of music's great ambassadors. She studied at the Guildhall School of Music, at the Paris Conservatoire and with Håkan Hardenberger. While under the aegis of the Young Concert Artists Trust, she caught the eye of EMI Classics with whom she records exclusively. Alison has also participated in BBC Radio 3's New Generation Artists scheme, through which she has performed at the Wigmore Hall and with all of the BBC Orchestras. For EMI, Alison Balsom has recorded a Bach Trumpet and Organ disc, which was enthusiastically received internationally; Caprice, which also won great critical acclaim, and a CD featuring the Haydn and Hummel Trumpet Concertos, which was named among the "24 records of 2008" by The New York Times. Alison Balsom won the Classic FM Listener's Award at the 2006 Gramophone Awards and was hailed as "Rising Artist of the Year" the following year at the Echo Klassik Awards. In 2009 she became the first Briton ever to be crowned Female Artist of the Year at the Classical BRITs. As a featured performer at the 2009 Last Night of the Proms at the Royal Albert Hall, she played the Haydn Concerto with the BBC Symphony Orchestra and David Robertson and works by Gershwin and Piazzola.

"A natural communicator, [endowed with] musicality, a lyric soprano of rare loveliness, a poised and dignified manner and [gorgeous] looks," (The Sunday Times), Kate Royal signed an exclusive contract with EMI Classics in 2006. Since then, the Guildhall and National Opera Studio graduate and winner of Kathleen Ferrier, John Christie and Royal Philharmonic Society awards has recorded two critically acclaimed solo albums: the eponymous Kate Royal and Midsummer Night, an atmospheric recital collection focusing on female characters in 20th century opera and operetta. She has also been featured in albums with the Choir of King's College, Cambridge, Ian Bostridge and Sir Paul McCartney. Equally at home in opera and recital, classical and 'crossover,' Kate has wowed audiences and critics alike with her appearances at Glyndebourne, the Wigmore Hall, Edinburgh Festival and Royal Opera House. Upcoming appearances include the Berlin Philharmonic and the Orchestra of Bavarian Radio under Simon Rattle, Le Concert d'Astrée with Emanuelle Haïm, the Los Angeles Philharmonic and Les Musiciens du Louvre. She has sung Donna Elvira at Glyndebourne, Pamina and Micaëla at the Bavarian State Opera and Pamina and Anne Trulove at the Royal Opera House. (www.royalmidsummer.com)

Soprano Alice Halstead (www.alicehalstead.com), a choir girl at St Alphege Church, Solihull and a pupil at King Edward VI High School for Girls, Birmingham, won the coveted title of "BBC Radio 2 Young Chorister of the Year 2008" award at St. Paul's Cathedral, London. From the age of four she has attended the Birmingham Junior Conservatoire where she studies singing, cello and piano. She is also a member of the National Youth Choir of Great Britain (Training North). Alice has appeared several times on BBC One's "Songs of Praise" and has featured in many national radio broadcasts including Good Morning Sunday with Aled Jones and Friday Night Is Music Night with the BBC Concert Orchestra on BBC Radio 2, In Tune on BBC Radio 3 and Sunday Worship on BBC Radio 4.

The chief librettist for Stella natalis Carol Barratt is a composer, pianist, lyricist and music educator with over 70 publications in print. She has written text for many works by Karl Jenkins, to whom she has been married for 34 years.

Karl Jenkins is one of the most prolific and performed composers in the world today - his anti-war work alone, The Armed Man: A Mass for Peace, commissioned by the Royal Armouries Museum in Leeds for the Millennium celebrations and premiered at the Royal Albert Hall in London in April 2000, has been performed nearly four hundred times in recent years.

Born in Wales and a graduate of Cardiff University followed by post-graduate studies at London's Royal College of Music, Jenkins was originally an oboist. It was a passion for jazz - he was a member of the bands Nucleus and Soft Machine - that led him to composition. Classically trained, but drawing on a diverse range of global influences, his composing style has transcended musical boundaries, including memorable ad jingles for Delta Air Lines, the Cheltenham and Gloucester Building Society, De Beers diamonds, British Airways and Levi's Jeans, the global 'crossover' phenomenon Adiemus, more 'classical' commissions such as Requiem, Stabat Mater, Quirk and The Armed Man: A Mass for Peace and television and feature film soundtracks.

Recent recordings include Kiri Sings Karl with Dame Kiri Te Kanawa; Requiem and Stabat Mater, which was premiered and released in March 2008, with the Royal Liverpool Philharmonic Orchestra & Chorus and the EMO ensemble from Helsinki.

The highest placed living composer in Classic FM's "Hall of Fame," Karl Jenkins's recordings have won seventeen gold or platinum disc awards. Jenkins holds Fellowships or Professorships at five universities/conservatoires, including the Royal Academy of Music. He was awarded an OBE by Her Majesty the Queen in the 2005 New Years Honours List and a 'Red f' from Classic FM for 'outstanding service to classical music." He has been a castaway on BBC Radio 3's Desert Island Discs and featured on ITV's The South Bank Show.

"Karl Jenkins is a rarity among contemporary composers, balancing popularity with innovation." (The Independent)