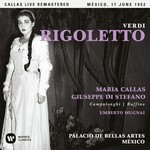 Callas only sang Gilda in Rigoletto twice on stage, in Mexico City in 1952, and this recording was taken from the first of those performances. She brought tonal substance and deep interpretative insight to a role that had sometimes been treated by light-voiced sopranos as an opportunity for coloratura display. Gilda's father, Rigoletto himself, is sung by Piero Campolonghi, an Italian baritone closely associated with the role, while Giuseppe di Stefano, is the dashing, but unscrupulous Duke of Mantua. He partnered Callas frequently during her career - on stage, in the recording studio and on a final concert tour of Europe, North America and Japan in 1974.