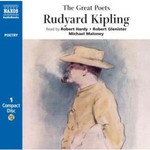 This anthology of Kipling's most famous poems-If, Mandalay, Gunga Din-is taken from the Naxos AudioBooks 'Great Poets' series. Though sometimes still regarded as a product of the colonial era, Kipling touches a very popular nerve in Britain's literary tradition, and is regarded more generously now as a master of popular verse. It is often forgotten that he won the Nobel Prize for literature in 1907.