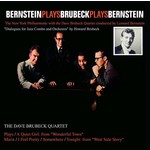 Dave's brother Howard Brubeck instigated the Bernstein Plays Brubeck Plays Bernstein album with his composition Dialogues for Jazz Combo and Orchestra. "In this work an attempt is made to construct a score giving the
orchestra an important part to play which adheres strictly to written notes, while the particular combination, or "combo," of jazz instruments, is free to improvise on the material of the movement..."

First performed at a New York Philharmonic series in December 1959, with Leonard Bernstein conducting, Dave Brubeck returned to the piece in January and rounded out the album with five Bernstein compositions, with the album subsequently being released later the same year.

The end result is an album that is widely considered to be among the best of the jazz meets symphony genre.