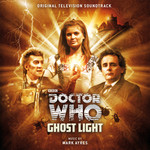 Originally released on Silva Screen Records in 1993, in this new version Ghost Light is freshly re-mastered from the original analogue stereo master tapes with consecutive cues combined into longer tracks. Also included are additional tracks previously omitted and the complete initial "demo" version of the music for Part One. The album presents the score in story order.

Though the score features small themes and motifs, the musical narrative relies on "sounds" rather than "themes". The composer juxtaposes the tender sound of strings, harp, clarinet with native drums and unearthly sounds of pipes, distorted gong, organ and choir.

Ghost Light was the final production of the series' original 26-year run.

A television composer best known for scoring the original series of Dr Who, Mark Ayres's work encompasses the era of Sylvester McCoy as the Seventh Doctor and includes scores for The Greatest Show in the Galaxy, Ghost Light, and The Curse of Fenric. Ayres was also part of BBC's unofficial Doctor Who Restoration Team and has done much of audio restoration from the later VHS Doctor Who releases.

"GHOST LIGHT demonstrates that the dying days of the CLASSIC SERIES could still deliver a level of music excellence and professionalism"
eyeofhorus.org.uk 8/10