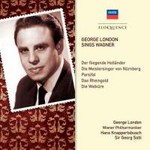 George London was born in Montreal, Canada; when he was fifteen the family moved to the United States. His original surname was Burnstein (he also used Burnson for a time) and his forebears were from Širvintos in Lithuania. He began his singing studies in Los Angeles, and by the 1940s was touring with a trio that included Frances Yeend and Mario Lanza. His début in a leading role was in Rigoletto for San Francisco Opera in 1946. Three years later, in Vienna, he sang Amonasro in Aida, a role that also launched his Metropolitan Opera career in 1951.

It was while London was singing the four villains in The Tales of Hoffmann in Vienna that Hans Knappertsbusch decided to recommend London to Wieland Wagner for the 1951 Bayreuth Festival. Seven years later, Knappertsbusch recorded four great Wagner scenes for Decca with George London. The recording appears here in its entirety, supplemented with one of the great scenes from their 1962 performance of Parsifal (recorded 'live' at the Bayreuth Festival it went on to become one of most venerated recordings of this opera) and the closing scene of Rheingold in which London appears on the celebrated Solti recording as Wotan.

London's vocal health began to deteriorate rapidly during the 1963-64 season; eventually the problem was diagnosed as paralysis of the vocal cords. Efforts to restore the voice proved fruitless, and in due course London had to accept that, at 46, his singing career was over. The operatic world had suffered a great loss. He died after a series of heart attacks in March 1985. George London is remembered as an exceptional and intelligent artist who combined a great voice and superb musicianship with a commanding stage presence.

"his singing compels admiration: a fine firm line, unfailing exactness of intonation and rhythm (how often can that be said of most Wagnerian singers?), exemplary enunciation, intelligent and expressive treatment of words and a true sense of character - no wonder he is highly regarded by Bayreuth. He is supported here by most beautiful orchestral playing - Knappertsbusch's masterly hand is everywhere apparent - which sets off Wagner's instrumentation in a rich glow. […] These are not merely good performances: they have that intense, imaginative re-recreation of the music which lifts them out of that category." (Gramophone)