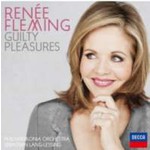 A sequel to the album - Beautiful Voice - that sold 187,000 copies and won Fleming a Grammy for Best Classical Vocal Performance. Fleming was seen by millions singing at the Jubilee celebrations for Her Majesty Queen Elizabeth II.

'Guilty Pleasures' is an album of sheer indulgence: the beautiful voice of Renée Fleming in a new and very personal selection of songs and arias featuring a feast of music, much of which we might never hear her sing on stage. For our pleasure she has chosen to record many famous arias from roles which are not normally associated with her repertoire: romantic highlights from operas by Dvorak, Smetana and Tchaikovsky among many others.

Two twentieth-century American composers offer the chance for Fleming to sing in her native tongue -the Irish folksong Danny Boy and John Corigliano's The Ghosts of Versailles.

Sebastian Lang-Lessing conducts the Philharmonia Orchestra in a programme that ranges from Berlioz via Tchaikovsky, Dvořák, Smetana, Wagner and Rachmaninov to Canteloube, Delibes and Massenet.

Renée Fleming will be awarded the National Medal of Arts and National Humanities Medal by the President of the USA on July 10th. The recognition is for her contributions to American music. Known to many as "the people's diva," Ms Fleming has captivated audiences around the world with an adventurous repertoire spanning opera and the classical tradition to jazz and contemporary pop.

'Danny Boy' is used in the movie "Three Billboards outside Ebbing, Missouri"

"(Fleming's) voice is astonishingly robust and vigorous, perhaps showing the tiniest hint of thinning at the very top, but as rich-probably richer-than it has ever been. Technically she can't be bested, using her ever-expanding repertory to good effect in terms of learning all sorts of styles and affections. The eight different languages used on this recording display Fleming at her most versatile, and leave one hankering for more. Example: we are given two of Falla's magnificent Siete canciones populares españolas, and they are so good, so perfectly rendered that it is a shame that she didn't just go ahead and record the other five." Five Stars AudAud.com

"The American soprano takes us on a whistle-stop tour of Europe on this offbeat and enjoyable album...The diva is in peachy voice throughout." Sunday Times