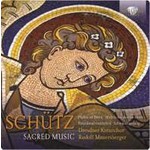 "Seculi sui Musicus excellentissimus" was the epitaph inscribed on his tombstone in the old Frauenkirche of Dresden - to his contemporaries, the Saxon‐born Heinrich Schütz was one of the most outstanding composers of the century, and even writers of music history today refer to him as 'Musicus poeticus ecclesiasticus', whose works were and are still the epitome of Protestant church music.

This collection is a tribute to the great Baroque composer, who received most of his training in Venice from the organist of St Mark's, Giovanni Gabrieli. The richness of colour and musical splendour of the Psalmen Davids, scored for several choruses and first to feature on the release, reflects the arts-minded Saxon court for which they were composed; next comes a collection of motets, which similarly follow in the footsteps of Venetian composition through 'painting in sound,' the content of the text and dividing the choir into two or more tonal groups. The motet played a significant role in church service music, and Schütz also wrote a number of polychoral concertos for festive occasions, the affective Magnificat anima mea SWV468 for Christmas among them. Rounding off the compilation is the composer's Schwanengesang, literally meaning 'Swan Song' and deemed to be his parting gift to the world - here Luther's version of the 'German Magnificat' at the end of the piece reveals Schütz's taking on the role of musical interpreter in the cause of Lutheran teaching.

The renowned Dresden Kreuzchor became closely associated with the works of Schütz under the directorship of Rudolf Mauersberger, who made the choir an instrument of singular appeal. Here they feature alongside a number of other distinguished German choral groups and ensembles, including the Berliner Solisten, to perform the works of a composer who represented an important transitional phase in sacred music.