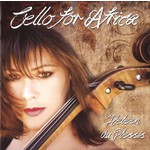 Cello for Africa saw Heleen du Plessis (South African cellist and Williams Evans Executant lecturer for cello at the University of Otago, member of the TriOtago piano trio and principal cellist of the Southern Sinfonia) set out on a journey of commissioning and recording new South African compositions for cello that would reflect the multi-cultural context of the country, capturing in sound the character, soul and unmistakable flavour of South Africa but also to expressing issues relating to identity, sense of belonging, alienation, loss and longing.

"The expression "for Africa" means "a lot of", highlighting the central role of the cello with its ability to voice a huge range of human qualities. It also expresses my wish to give back something to South Africa - the place I call home...

I wanted music that paints in sound the diverse images of my country, or which would take their inspiration from South African narratives, paintings and poetry…I had a preference for relatively tonal music (in a musical "sense" a place of belonging), which is melodic (to sing and cry) and rhythmically characteristic of South Africa (to dance and celebrate). The project provided the long awaited opportunity to extend my scope of reference beyond that of my western musical upbringing and to begin engaging with indigenous African music, played on traditional instruments (such as the mbira, marimba, various percussion instruments and African voice) or rendered in vernacular vocal style." - Heleen du Plessis, from the liner notes.