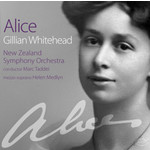 This recording sees the composition performed by the New Zealand Symphony Orchestra conducted by Mark Taddei, with mezzosoprano Helen Medlyn.

In 1909, Alice Adcock, a lively and adventurous young woman from Manchester, was on her way to New Zealand. She was 23, and had recently developed TB, for which there was no cure. Somehow she persuaded her widowed father to let her travel alone to the other side of the world in case a healthy climate would save her life (it worked - she lived for another 50 years). This is the story of Alice, as a monodrama, with text by Fleur Adcock and music by Gillian Whitehead.

"The music of Alice is text‐driven, ranging between a language at times extremely simple, as was the basic musical language of the settlers, and at times quite complex, evoking a storm at sea, or the unease of the settlers in a new environment, or Alice's reaction to the problems which beset her. The piece is held together by various referential motifs. The initial idea, which perhaps suggests the instability of the sea, is also present in the bell‐like sounds marking Charles' death, music associated with a storm at sea is later associated with mental stress, while music suggestive of the movement of shipboard lice later underlies Alice's traumatic encounter with her sisters‐in‐law…While writing this piece, I was drawn again and again into the thought that, although this is a true story, set in a particular place at a certain time, it has the resonances of a universal myth, known to all of us who live here. Our forebears, or we ourselves, have crossed the seas to begin a new life, with unforeseen and unimaginable difficulties and felicities, whether ten years, a century or a millennium or so ago." - notes from the original programme via www.sounz.org.nz

1-8. Alice, a monodrama for mezzo-soprano and orchestra.
1. On board the S.S. Fifeshire
2. Arrival in New Zealand
3. Father and daughter exchange letters
4. Alice discovers she is pregnant
5. The death of Alice's father
6. The death of Alice's husband
7. Alice's return to the farm at Makaroa
8. Looking forward to a new life /

9. Karohirohi - for solo harp and orchestra with Carolyn Mills, harp

10. The Improbable Ordered Dance - for orchestra