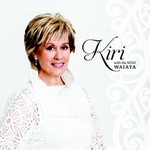 In 1999 Dame Kiri Te Kanawa released 'Maori Songs', her second collection of Maori folk songs and prayers. That project was initiated by prominent NZ pianist/arranger Carl Doy, who has 13 years later created the follow up album 'Waiata'. After many months of planning Dame Kiri returned to NZ in July to record her vocals for the album at Carl's Brown's Bay home studio. Carl Doy had earlier scored the accompaniments for our own NZSO and the Auckland University's Chamber Choir, with renowned actor and Maori speaker George Henare as 'guide and philosopher'.