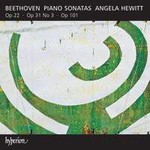 Angela Hewitt presents a fourth volume in her acclaimed series of Beethoven's piano sonatas, which has delighted her fans worldwide.

The little-known Sonata in B flat major, Op 22, the last of Beethoven's 'early' sonatas, is recorded alongside Op 31 No 3 (sometimes known as 'La chasse', or 'The Hunt', because of its tumultuous Presto con fuoco finale). The album is concluded with Op 101, of which the journalist for the Allgemeine musikalische Zeitung in Leipzig wrote: 'Truly, here in his 101st composition admiration and renewed respect take hold of us, when we wander along strange, never trodden paths with the great painter of the soul', going on to enthuse about the most beautiful colours and pictures in Beethoven's new Piano Sonata.