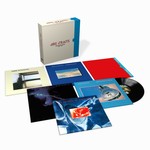 Formed in 1977 Dire Straits, led by the incomparable Mark Knopfler, were one of the greatest groups of the late 20th Century. When they first appeared on the London live circuit, their timeless music, faultless musicianship and memorable songs connected with music lovers. This was at a time when much of the UK music scene was consumed by punk and new wave. From the start, it was clear that Dire Straits would set their own path and whilst the zeitgeist showed there was an appetite for the new, Dire Straits proved that classic song writing would never go out of fashion.

Working hard touring, writing and recording they released a series of ever more successful albums and by 1985 they were the biggest selling band in the world. Dire Straits appeal was almost instantly global. They toured the world building an enormous and loyal international following. Their keynote songs, such as 'Sultans Of Swing', 'Romeo And Juliet' and 'Money For Nothing' dominated the airwaves in the 80s and the revolutionary new music TV channels such as MTV propelled the songs to become international standards. They remain one of the most played bands on radio to this day.