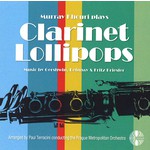 Murray Khouri's long and distinguished career has embraced the roles of clarinet soloist, record producer, educator and broadcaster. He's appeared as a soloist in 12 countries and served as director of festivals in Denmark and Australasia. His two
decades in London were spent playing in the London Philharmonic, Royal Philharmonic and BBC orchestras under a galaxy of great conductors ranging from Pierre Boulez to such notables as Morton Gould and Bernard Hermann. Murray's many recordings have received the highest praise winning such prizes as The Gramophone Award and the Grand Prix du Disque. His recording of the two Brahms Clarinet Sonatas was singled out by French critics praising his warm full timbre used to "superbly shape the contours of the melodies". It was also the preferred version on BBC Radio Three's "Building a Library" As a producer he single-handedly began the renaissance of British Light Music with his ground breaking Marco Polo series of 20 discs for Marco Polo which he programmed and directed.

These 18 short pieces are dedicated to Reginald Kell one of the 20th century's greatest wind players and the only clarinetist to record a disc of Light Music.