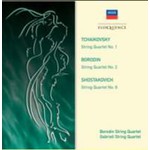 Tchaikovsky's First Quartet, Borodin's Second and Shostakovich's Eighth are three of the finest quartets in the Russian repertory. They reveal that Russian composers were hardly less at home in the relatively private medium of the string quartet than when writing for the more spectacular full symphony orchestra. Both, the Tchaikovsky and the Borodin have received fame beyond the originals for their slow movements - the Tchaikovsky for its 'Andante cantabile' movement, the Borodin for its 'nocturne'. The Gabrielis were one of the first ensemble to make stereo recordings of all three quartets and the Borodins' 1962 recording (their original line-up) of the Borodin and Shostakovich quartets is one of the great chamber music recordings of all time.