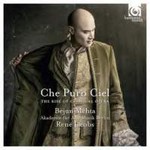 In the famous Preface to Alceste (1767), Christoph Willibald Gluck and his librettist Ranieri de' Calzabigi posited a new direction for opera. They spoke of moving beyond Baroque forms, of striving for a new naturalism in opera. They wanted, in Calzabigi's lovely phrase, to liberate the language of the heart. Taken from the height of this Reform period, the arias on this disc reveal composers exploring and experimenting, at struggle and at play, as they create the new forms that bring to opera the noble simplicity of the Classical era.

"Mehta shows how [coloratura passages] can have real expressive point and dramatic purpose, while his purity of line in quiet passages is ravishing...René Jacobs's meticulous accompaniments with the Akademie für Alte Musik add the finishing touches." The Guardian, 14th November 2013 ****

"a well-chosen showcase, Mehta's dramatic instincts are effectively deployed, and the accompaniments in the recitatives are handled with all the fluency we've come to expect from Jacobs complete Mozart opera recordings" CD Review, 16th November 2013

"if you have an ear for the tragic passions beneath the music's formal contours, you will succumb to its expressive grace, especially with interpreters as persuasive as Mehta and the Akademie für Alte Musik Berlin under René Jacobs." Financial Times, 21st December 2013 ****

"Jacobs and Bejun Mehta unleash the primal energies buried in magnificent yet largely forgotten operas...Jacobs's abrupt tempo twists, the instrumentalists' boldness and the chorus's power make such ensemble sections as electrifying as Mehta's solos. This is a daring and important retelling of the story of Classical opera." Opera Choice BBC Music Magazine, February 2014 *****

"Always acutely alive to text and dramatic situation...Mehta's dramatic involvement elevates some rather routine invention in the items by the teenage Mozart...The most enjoyable, intelligently planned countertenor recital to have come my way in years." Gramophone Magazine Editor's Choice, February 2014