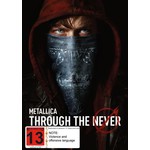 Metallica: Through The Never

Metallica Through the Never is a 2013 American IMAX thriller concert film featuring the American thrash metal band Metallica. The film shares its name with the song "Through the Never" from the band's 1991 black album; the feature follows young Trip's (Dane DeHaan) surreal adventure during an urgent mission he is sent out on, sewn together with concert footage from a set of concerts Metallica held in Vancouver, August 2012.