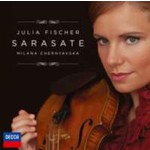 The dazzling showpieces of violin legend Pablo Sarasate meet their match in Julia Fischer, one of the most sought-after musicians of her generation, delivering virtuoso pyrotechnics in a stunning recital disc.

The key track is Sarasate's most celebrated composition: Zigeunerweisen ('Gypsy Airs'). With its heady czardas rhythms and folk flavour, it is best known as a showpiece for violin and orchestra, but Fischer and her long-standing accompanist Milana Chernyavska present it here as it was originally written, for violin and piano.

Fischer's recording will help shine a new light on Sarasate's music, which she wants to restore to the concert platform. She feels that each of the pieces is a little gem with a mood and story all its own, and says that she wants to communicate the joy and enthusiasm of pieces that make people want to dance or sing.

Sarasate's contemporaries held him in extremely high regard, with Camille Saint-Saëns, Max Bruch and Édouard Lalo all dedicating works to him. He was one of the first violinists to leave acoustic recordings in the pioneering years of the 20th century, recording his Zigeunerweisen in 1904, and his extraordinary writing remains a supreme challenge to violinists over a century after his death in 1908.

"(Fischer) possesses aristocratic distinction, clarity of articulation and a sure sense of elegance." (MusicWeb)

"These dazzling works . . . make great showstoppers and encores, but what's surprising is how satisfying they turn out to be in their own right. Beginning with a couple of Spanish dances, it's apparent from the get-go how effortlessly the 30-year-old masters the technical challenges of works designed to leave jaws on floor. She sounds like she's having fun, and why wouldn't she, especially in "Zigeunerweisen", whose czárdás rhythm allows Fischer and accompanist Milana Chernyavska to demonstrate how convincingly a German and a Ukrainian can perform Spanish music inspired by Hungarian gypsies . . . What a terrific, entertaining disc."
Record Review / Martin Buzacott, Limelight Magazine (Australia)