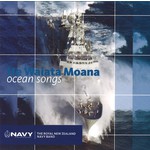 The Royal New Zealand Navy Band is one of the country's foremost musical ensembles. It continues its proud tradition of performing at a range of National and International events, from ceremonial parades to public and school concerts with New Zealand's top musicians.

1981 was the last time the Royal New Zealand Navy Band produced an album so it is with great pride and pleasure that the CD He Waiata Moana is released. Showcasing the variety and versatility of the thirty band musicians this recording will have something for everyone. One of NZ's most exciting international tenors, Simon O'Neill, performs a stunning "Nessun Dorma" on this album as well as the song "Here's to the Heroes" in the military tribute of the final tracks of the CD. Coupled with the Last Post in "Nightfall in Camp" this segment is a thoughtful and poignant moment of remembrance, particular in 2014, the hundredth anniversary of the start of the Great War.

The Royal New Zealand Navy Band is a full time military band based in Auckland. Its history dates back to the 1950's when musicians from Her Majesty's Royal Marine Band Service were posted to New Zealand to provide musical support to the Navy. In 1962 these musicians were recalled to the United Kingdom, and with the help of some who stayed, the nucleus of the current Band was formed. The Band has since performed all over New Zealand, and travelled internationally also.