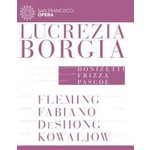 This is the first EuroArts release in cooperation with the San Francisco Opera, internationally recognized as one of the top opera companies in the world

Fleming plays a femme fatale renowned for her ruthless pursuit of power that reveals poignant vulnerability when she comes face to face with her long-lost son.

"Fleming seems fired by the theatricality of a reviled female character who commands every dramatic situation she encounters...The main reservation is her calculation...DeShong is a powerful vocal and dramatic presence as Orsini...The John Pascoe production is handsome, sumptuous and towering with ornate costumes." Gramophone Magazine, March 2014

"Fabiano's plangent tenor is an ideal bel canto instrument with flexibility and strength...I shall follow his career with interest. The same goes for Elizabeth DeShong as Orsini. Her voice is a full-toned wide-ranging mezzo to which she adds convincing acting skills...The traditional staging and period costumes aid the historical perspective" MusicWeb International, 28th January 2014