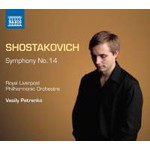 At its première in June 1969 Shostakovich described his Symphony No. 14, in effect a symphonic song cycle, as 'a fight for the liberation of humanity... a great protest against death, a reminder to live one's life honestly, decently, nobly...' Originally intending to write an oratorio, Shostakovich set eleven poems on the theme of mortality, and in particular early or unjust death, for two solo singers accompanied by strings and percussion. This is the penultimate release in Vasily Petrenko's internationally acclaimed symphonic cycle.

"Vasily Petrenko enjoys the distinct advantage of two absolutely fabulous young soloists. Soprano Gal James has a nice Slavic tang to her timbre (she is in fact Israeli), but with no attendant Slavic wobble and not a trace of shrillness. Her plaintive lyrical singing in The Suicide is as harrowing as her laughter in Madame, look! sounds diabolical. The sonics are crystal clear, and if the balances favor the voices, the singing is so superb that we can only welcome the attention. This is just stunning, one of the finest releases in what is already an exceptional cycle" (10/10 ClassicsToday April 2014)

"Petrenko gets appropriately dark and brooding textures from his strings and percussion ensemble, unleashing sounds of raw ferocity...[Vinogradov] has a magnificent dark bass and trenchant delivery of the text, an ideal voice for this music. At Naxos's bargain price, this is unmissable." Sunday Times, 20th April 2014