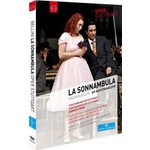 The production La Sonnambula of the Oper Stuttgart was voted Opera of the Year in 2012 by the international renowned magazine Opernwelt.

In this extraordinary production the directing duo of Jossi Wieler and Sergio Morabito, well-known for their psychological realism, address the dormant and profound questions of our civilization an its myths that trouble the eponymous sleepwalker.

Set & costume designer Anna Viebrock has been awarded with the Theatre Prize Berlin (2013), the Hein-Heckroth Prize (2013) amongst many other prizes.

"The Stuttgart team...bluntly portray Amina's sleepwalking as a mental problem...Musical, we are in the safe but far from unexciting hands of Gabriele Ferro…As well as fielding a Caruso/Bjorling-like ability to crescendo on those high peaks, Durlovski is a terrific natural actress." DVD of the Month Gramophone Magazine, May 2014

"The result is fascinating even if at times over-earnest...Durlovski's soprano may be on the gaunt side, but she has all the notes for the title role...A fine actor, tenor Luciano Botelho makes a complex figure of her fiance, Elvino. Gabriele Ferro conducts with an authentic sense of style." BBC Music Magazine, May 2014 *****

"Durlovski as Amina has the necessary flexibility and ability to make the most of Bellini's long and lovely phrase...this is musically a thoroughly distinguished performance. It is this and the dramatic wholeness with the sense of an ensemble at work that is so appealing about this recording. La Sonnambula can seem to lack dramatic interest or coherence but not here." MusicWeb International, 22nd April 2014