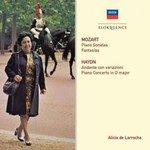 Alicia de Larrocha made several LPs of Mozart's solo piano music for Decca between 1973 and 1986. In a series of recordings on Decca Eloquence, reissued to celebrate her artistry, this 3CD set brings together, for the first time, all her solo Mozart - nine sonatas, the D major Rondo, and the D minor and C minor Fantasias (both recordings of the C minor - 1973 and 1986 are included in this set).

The CDs are filled out with her two Haydn recordings for Decca - the F minor Variations and the D major Concerto. The booklet includes colour reproductions of four of the LP sleeves pertaining to this release.

'Refreshing … what a lovely Mozartian touch she has - each individual note glistens … each one of the variations [in KV 331] is very keenly characterized … Good marks to the engineers for such limpid tonal reproduction'
Gramophone
April 1975 (on KV 331, 475, 485)

'Effortless … this doyenne of Spanish pianists knows how to tap the lyrical source to so much of Mozart's invention and how to sing like a nightingale. She invites us to listen; but her tone of voice is never over-insistent. … All credit to Decca for the warm and lifelike sound'
Gramophone
March 1979 (on KV 332, 545, 576)

'It is not easy to make Mozart's earlier sonatas sound more than accomplished and fluent, but this great Spanish artist brings out all the tenderness and humanity of this unpretentious little work [KV 282]; and she plays the great A minor with a sense of commitment and understanding that is far more telling than the stormy, melodramatic approach adopted by many lesser pianists'
Gramophone
January 1981 (on KV 282, 310)

'[Larrocha] plays the Mozart sonatas with great authority and conviction … she seems to see this C minor drama through Beethoven's sturdy eyes.'
Gramophone
September 1987 (on KV 457, 475)