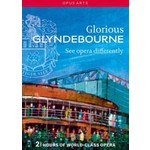 An exuberant brainchild of John Christie, Glyndebourne Festival Opera launched in 1934 with a production of Mozart's The Marriage of Figaro. Since then, Glyndebourne has become a byword for excellence, bringing together the finest operatic musicians of the day for extended rehearsals in an idyllic setting with uncompromised technical and theatrical standards. This celebration includes 12 productions from the last 13 years ranging across 'signature' works such as The Marriage of Figaro, classic productions such as The Rake's Progress with designs by David Hockney, and new adventures in Baroque opera and Wagner.

Over two and a half hours of world-class opera.

Includes the acclaimed The Marriage of Figaro and The Cunning Little Vixen from 2012.

"Full of colour and light, and brimming with wit, this is a production that lifts the performers...Lehtipuu conveys [Tom's] fresh-faced innocence, making his gradual demise all the more heart-breaking. Bass Matthew Rose is not the most chilling Nick Shadow, but is all the more believable as an apparently supportive, and likeable, friend to Tom, until the veil drops...[Persson] underpins [Anne's] heartfelt love with a steely determination...An absolute triumph."
(BBC Music Five Stars DVD Choice - January 2012 Rake's Progress)