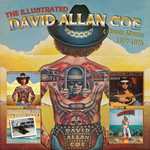 Early in his career, the one-time jail-bird, notoriously unpredictable "bad boy" outlaw of country music caused outrage but by the mid-70s he'd become one of Nashville's hottest songwriters - Willie Nelson, George Jones and Tammy Wynette covered his songs and both Tanya Tucker's version of 'Would You Lay with Me (In a Field of Stone)' and Johnny Paycheck's version of 'Take this Job and Shove It' were #1 Country hits. Coe's own recordings of both songs appear on this outstanding collection, the high-water mark for outlaw country music. Tattoo is one of Coe's finest recordings, full of stomping honky-tonk playing on 'Just to Prove My Love' plus his deeply moving cover of Mickey's Newbury's 'Frisco Mabel Joy'. Other highlights here include 'Human Emotions', 'Mississippi Riverboat Queen', 'Million Dollar Memories', 'Rolling with the Punches' and 'Whole Lot of Lonesome' which he co-wrote with George Jones.

Disc 1
1.Just To Prove My Love for You
2.Face to Face
3.You'll Always Live Inside of Me
4.Play Me a Sad Song
5.Daddy Was a God Fearin' Man
6.Canteen of Water
7.Maria is a Mystery
8.Just in Time (To Watch Love Die)
9.San Francisco Mabel Joy
10.Hey Gypsy
11.Family Album
12.Million Dollar Memories
13.Divers do it Deeper
14.Guilty Footsteps
15.Take This Job and Shove It
16.Houston, Dallas, San Antone
17.I've got to Have You
18.Whole Lot of Lonesome
19.Bad Impressions
20.Heavenly Father, Holy Mother

Disc 2
1.Would You Lay With Me (In a Field of Stone)
2.If this is Just a Game
3.You Can Count on Me
4.Mississippi River Queen
5.Tomorrow is Another Day
6.Human Emotions
7.(She Finally Crossed Over) Love's Cheatin' Line
8.Whiskey and Women
9.Jack Daniels, If You Please
10.Suicide
11.Rollin' With the Punches
12.On My Feet Again
13.Fall in Love with You
14.What Can I Do
15.Sudden Death
16.Fairytale Morning
17.Seven Mile Bridge
18.Now's the Time (To Fall in Love)
19.Love is Just a Porpoise
20.Loving Her (Will Make You Lose Your Mind)