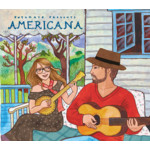 From Asheville to Austin, contemporary singer-songwriters explore America's rural musical roots. Updated with 6 new tracks. The landscape of American music is as vast and varied as the geography of the country itself. At its root are a range of diverse cultural influences that have combined to form what is now called Americana music. Sometimes called "alternative country," it's a genre whose parameters are broad enough to include bluegrass, folk and traditional country with occasional elements of blues and jazz. In the 1990s, Americana made a home for itself on the airwaves, bridging the gap between Triple A (Adult Album Alternative) and mainstream country radio and allowing audiences to explore a sound stripped of the slick production that usually dominates the industry. At the heart of Americana are contemporary singer-songwriters who have honed their craft by exploring the country's rural traditions.