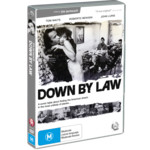 A comic fable about finding the American dream in the most unlikely of places.

Jim Jarmusch's highly acclaimed film is best summed up by his own words: a "neo-beat-noir-comedy". Too laid-back to avoid a prison term for a murder he did not commit, Zack (Tom Waits), finds himself sharing a jail cell with a small-time pimp (John Lurie) and an effervescent Italian (Roberto Benigni) arrested for killing a man while playing cards. An eventual escape leads the eccentric trio into the depths of the Louisiana bayou with no salvation in sight. It isn't until they land at the small home of an Italian immigrant (Nicoletta Braschi) that Zack, Jack, and Roberto learn to appreciate the beauty the world has to offer. The enchanting chemistry of the lead actors combine with Robby Müller's gorgeous black-and-white photography to create one of the most charming films to come out of America in decades.