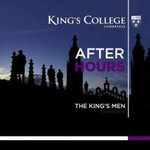 The King's Men is the close harmony group made up of the choral scholars of the choir of King's College Cambridge, and the group regularly tour across the UK and abroad. Recent highlights have included performances with trumpeter Alison Balsom and backing vocalists for Dizzee Rascal at London's Electric Proms.

The group has previously released CDs of Folk Songs and Spirituals, Christmas close-harmony music and two very successful albums of early renaissance music on the Signum label, but the more 'popular ' side was not documented, until now.

This entertaining collection of popular repertoire is a faithful representation of the sound of the group in concert, and includes selections of the full 14 voices in tracks such as 'Get Around' and 'Minnie the Moocher'; a reduced complement of 10 on 'September', all the way down to one-to-a-part, 7-man sound on 'Old Man River' and 'A Nightingale Sang in Berkeley Square'.

The majority of the album was recorded live in a semicircle, as for a concert, and without digital systems. This has ensured a purity of sound, ideal for the more complex harmonies in some of the songs, and provided an intimacy to the recording. Three arrangements of recent popular music tracks 'Call Me Maybe', 'Forget You' and 'I Want you Back', were recorded in a studio to make the arrangements come across at their best.

Listeners are sure to delight in the purity of the a cappella voices, and diverse selection of songs selected by the group. All of the arrangers are previous members of The King's Men, and the album has been greatly supported by Ben Parry, musical director of the Swingle Singers.