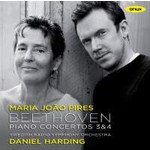 Maria João Pires joins ONYX. Her first release for the label is of two Beethoven concertos she has played often, but never before recorded. After giving concerts in Stockholm last October, she went directly into the studio with Daniel Harding and the Swedish Radio Symphony Orchestra. This remarkable recording is the result. These are performances of such passion, poetry and drama - Beethoven as he should sound, just as if you are hearing these great concertos for the first time!

Maria João Pires has provided a personal note on her approach to these works.

"she's recording the third and fourth piano concertos for the first time - and playing them with such unaffected simplicity that you always feel the notes speaking, never the pianist herself. Turbulent emotions, grandiose gestures and winking gaiety arrive as they should, yet nothing is pushed to extremes." (The Times)

"the Swedish orchestra's strength, subtlety and sonority establish a good foundation and foil for Pires's performances here. That wonderfully rounded, opalescent tone that her touch invariably produces is coupled with the insight, poetic sensibility and discreet life-giving force that come from years of experience." (Daily Telegraph)

"When you see Maria João Pires perform it is astonishing to think that she has reached her 70th birthday, so sprightly and constantly questioning is her playing. It is every bit as astonishing to think that this is her first disc of Beethoven concertos. Better late than never, though, and I hope that this is only the first such disc of many. This disc was both exhilarating and enlightening to listen to. Let's hope there is more on the way." (MusicWeb Oct 2014)

"Never for a moment does she over-reach herself or force pace and sonority...Few pianists have ever been more true to their own lights and it is hardly surprising that her many performances of this concerto in London and elsewhere have become the stuff of legends...It is my dearest wish that this will become a complete cycle." (Gramophone Magazine Award WINNER 2015)

"Onyx's engineers have achieved a superb natural sound-picture with an ideal balance between piano and orchestra. This recording is a resounding success and I have no hesitation in giving it my wholehearted endorsement. Is this the start of a prospective cycle? Let's keep our fingers crossed." (MusicWeb recording of the Month Nov 2014)