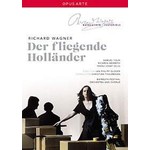 2013's revival of Jan Philipp Gloger's controversial 2012 production was greeted (as so often in Bayreuth) with huge acclaim. He translates the tale of the Dutchman, whose travails can only be redeemed through the unconditional love of a woman (Senta), to a future time, where part-human/part-cyborgs grind out an existence in a world completely subservient to business and commerce. In the modern fan-making factory, which replaces the world of Senta and her fellow seamstresses, we see a final tableau in which the Dutchman's and Senta's heavenly union is 'commemorated' by the factory workers now producing souvenir statuettes of the couple. The production stars Samuel Youn, Ricarda Merbeth, and Franz-Josef Selig, and is conducted by Christian Thielemann, arguably the greatest Wagnerian conductor of today.