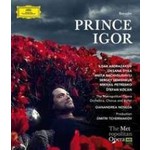 For the first time in nearly 100 years, Borodin's defining Russian epic, famous for its Polovtsian Dances, comes to the MET.

Dmitri Tcherniakov's production is a brilliant psychological journey through the mind of its conflicted hero, and his "[…] wonderful staging is dreamlike, wrenchingly human and viscerally theatrical" (New York Times).

The Blu-ray includes a "Backstage at the MET" with host Eric Owens:

"The result is attractive and gripping because the production knows what it wants to see (personal psychodrama than Kismet-style pseudo-orientalism)...Both Ildar Abdrazakov...and Oksana Dyka inhabit these roles with vocal agility and, in their acting, a refreshing lack of the old-fashioned hamminess that used to pass for charisma in 19th-century Russian opera...Strongly recommended." Gramophone

"Abdrazakov is mightily impressive in the title role, and there are powerhouse performances from Stefan Kocán as Konchak and Mikhail Petrenko as Galitsky. Noseda, as always in Russian music, is formidable." The Guardian