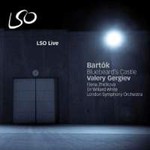 Text in Hungarian with English translation.

Valery Gergiev is joined by two outstanding singers for his latest LSO Live release featuring Bartók's one-act opera. Despite being one of the greatest ever interpreters of the role of Bluebeard on stage, this is Sir Willard White's first complete recording of Bluebeard's Castle. His Judith is the outstanding young Russian-born, Berlin-based mezzo Elena Zhidkova. Sir Willard performs extensively around the world during 2009 including appearances at The Metropolitan Opera in New York and La Scala in Milan. Elena Zhidkova will appear with the LSO and Gergiev at the BBC Proms and make her debut at the Mariinsky Theatre. She also performs in Palermo, Dresden, Leipzig, Amsterdam, Prague and Tokyo as well as returning to La Scala. Bartók's only opera is a dark and intense work, involving only two characters. Bluebeard's young bride persuades him to open seven doors in his castle in order to let light into the grim interior. Behind each she finds increasingly disturbing sights, until behind the final door she discovers Bluebeard's former wives and learns her fate.

'Who needs weeping walls and blood-stained jewels when you have the voice of Elena Zhidkova? As Bluebeard's wife she made us see and feel it all' The Times

"…Gergiev and his superlative orchestral forces and vocal soloists, supported by magnificent sound quality, present the enigmatic piece with great power, leaving us, as adequate performances always do, feeling stunned and somewhat bewildered. Willard White's Bluebeard, exceptionally firm of tone, implacable but tormented without ever indulging his pain, is magnificent. He needs to be to counter the superb Elena Zhidkova..."
(Five Stars BBC Opera Choice)

"For the perfect introduction to Bartók's Bluebeard look no further. …the pivotal moment is the sombre burbling of the lake of tears… where Judith is transfixed by the water's unearthly hush and Bluebeard explains, "tears, my Judith, tears, tears…". Gergiev sustains a pretty slow tempo while clarinet and low strings embrace both protagonists with long, expressive lines. The opera's later episodes, such as the accelerating blood-rush as Judith susses the shocking truth (Gergiev and his players are on tremendous form here), Bluebeard pondering his past wives and the overwhelming moment when Judith at last joins them, all suggest similar levels of thoughtfulness, sense of theatre and sensitivity to mood." (Gramophone)