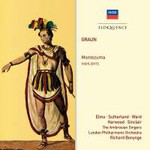 Among the bel canto and verismo operatic repertoire Richard Bonynge recorded for Decca, he also found time to unearth much hitherto forgotten ballet scores, as well as forgotten music from the Baroque and Classical eras. Music by J.C. Bach and Salieri were recorded, rare Baroque overtures were explored and he also recorded three largely forgotten Baroque operas - Graun's Montezuma and Bononcini's Griselda (both in highlight form) and Shield's Rosina (complete). All three recordings emanated from the 1960s and many included Australians in the casts, among them Lauris Elms, Joan Sutherland, Monica Sinclair, Margreta Elkins and Kenneth MacDonald.

Carl Heinrich Graun was born into a musical family from Saxony in 1703 or 1704. At the age of sixteen he heard an Italian opera troupe under Antonio Lotti in Dresden, and became forever smitten. As a boy he had a beautiful soprano voice, and was later engaged as a tenor at the Court Theatre in Brunswick. The music historian Charles Burney calls him 'the idol of the Berlin school'; he had a melodic gift of a very high order and he understood exactly how to write for the human voice.

The plot of Montezuma is loosely modelled on Voltaire's Alzire. Among the explorations made in the New World by the Spanish conquistadors under King Ferdinand and Queen Isabella, those of Cortez were the most important and far-reaching in their effects. His conquests in what is now Mexico brought about the downfall of the ancient civilisation of the Aztecs, and one of the first to suffer was their emperor, Montezuma. He allowed the Spaniards to land in good faith, learning too late that his generosity would cost him his life. His tragic death, the story of Eupaforice, his betrothed, and the cruel behaviour of the Spanish general, form the background of this opera.ngs mingling with shepherdesses.