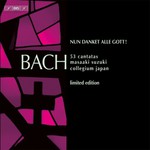 In 2010 BIS celebrated the first 15 years of the monumental project by releasing a limited edition of the first forty discs in four boxed sets. The 55th and final volume of the series was released in November 2013 and Bis now release the fifth and final box. This is in CD versions rather than the SACD of the original release.

The series started with the cantatas composed in Muhlhausen in 1707-08 and has proceeded largely chronologically. The present box therefore comprises the final extant 53 cantatas from Leipzig.

ORDER NOW AND WE WILL INCLUDE A COMPLIMENTARY DOUBLE CD RECORDING OF BACH'S ST JOHN PASSION PERFORMED BY THE BACH COLLEGIUM WORTH $55!!

"Suzuki accords these works the same level of respect as Bach did, consistently striking the right balance between either joyous celebration or sober reflection and a controlled dignity proper to the occasions they adorned. His choir and orchestra perform lovingly as ever, phrasing with profond taste and intelligence, and benefitting from sound and balance judged to perfection." Gramophone Magazine on Vol 51

"…a programme demonstrating Bach's astonishing variety and imagination in musical structures, instrumental tone-colours and response to texts. BWV 72, for instance, opens with spine-tingling energy, instruments and voices in floridly elaborated lines over a slow, powerful harmonic foundation. It's followed by two violins and continuo weaving their trio sonata texture around Robin Blaze's alluring countertenor, while remaining wholly independent of him melodically." BBC Music on Vol 42

"Suzuki achieves that rarest of balancing acts in Bach: a sense of spiritual gravitas, but lightness of touch; the delight in complexity, but absolute transparency of texture; rhetorical awareness of the text, but musical plain speaking. The solo team here is one of the best line-ups we've had for a while." International Record Review on Vol 47