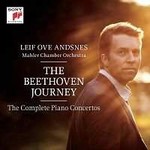 Leif Ove Andsnes and the Mahler Chamber Orchestra have now recorded all of the Beethoven piano concertos. The Beethoven Journey is a four-year collaborative project between celebrated pianist Leif Ove Andsnes and the Mahler Chamber Orchestra. Together they have recorded all of the Beethoven Piano Concertos, as well as the Choral Fantasy, with Andsnes not only playing but also directing the orchestra. The series began with the live recording of the Piano Concertos 1 & 3 at the Prague Spring Festival in the historic Rudolfinum building. The second CD, Piano Concertos 2 & 4, was recorded in London in 2013, and the final album was recorded again live at the Prague Spring Festival. Leif Ove Andsnes has devoted the majority of his performing and recording activities in the last 3 years to the music of Beethoven. The first recording for the project was named iTunes' Best Instrumental Album of 2012. The second recording enjoyed an outstanding reception from critics, with many heralding the release as one of the finest recordings of the 2 & 4 Concertos. Although Andsnes has an extensive discography "The Beethoven Journey" is his first Beethoven recording ever.

"there's a palpable sense of discovery, of living the music...You know you're in remarkable musical company before the piano has sounded a note...Of course, this isn't just down to the players: it's Andsnes's conception right from the start...What's also very striking is that these performances are not simply about elan and energy: they have a sense of gravitas, too, of rightness, that you find in the greatest Beethoven interpreters." (Gramophone on concertos 1 & 3)

"Andsnes's view of the Emperor Concerto's slow movement may strike some listeners as less contemplative and poetic than usual, and it may be that his interpretation of the piece will deepend over time, but it's beautifully played...Particularly notable in Andsnes's performance of the first movement is the mysterious approach to the recapitulation, where he and the orchestra vividly convey the feeling of the music holding its breath." BBC Music on 5 & Choral Fantasy

"One of the pleasures of these splendid performances is the rapport between the soloist/conductor and his musicians. They play as one. Another is the clarity of texture and the variety and sensitivity of colour...Andsnes's playing sparkles, but, however swift, never sounds hurried." Sunday Times