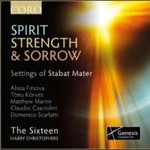 Spirit, Strength & Sorrow is the staggering result of The Sixteen's third collaboration with the Genesis Foundation and demonstrates, once again, their joint commitment to nurturing new artistic talent. This CD features three brand new settings of the Stabat Mater from emerging composers, Alissa Firsova, Tõnu Kõrvits and Matthew Martin alongside those by Claudio Casciolini and Domenico Scarlatti.

Harry Christophers writes: 'I find it staggering to think that it was only eight years ago when I first met John Studzinsiki. We had been invited to perform a very special work by Will Todd, aptly written for sixteen solo voices, which John had commissioned for his birthday. From this moment began a fruitful, meaningful and, above all, inspirational collaboration with John and the Genesis Foundation. Every project since has emanated from John's devotion to the Catholic faith and his love of the wonderful poetry which encapsulates Christianity as well as his laudable mission to promote and nurture young talent.'

"All three [new works] are worth hearing and Domenico Scarlatti's "Stabat Mater" makes a highly enjoyable Baroque companion for them." (Financial Times)

"Three new responses to the text, commissioned by John Studzinski's Genesis Foundation, are sung here with faultless clarity by the Sixteen...Each is a significant contribution to the repertoire, sitting proudly alongside more familiar settings from Scarlatti and Casciolini, and all meticulously directed by Harry Christophers." - The Observer

"All three [new settings] are touching and effective: imaginative in their choral sonorities and colouring of the text, skilfully balancing a strong feeling for tradition with a distinctive individual voice...At moments in their intimate and elegiac performance of the Scarlatti I wanted a dose of Latin theatricality. But in the new works their singing, technically and expressively, is beyond criticism." Editor's Choice Gramophone Magazine, January 2015