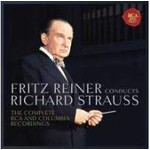 An x11 CD, budget-priced box set on the 'Sony Classical' label. Across time, there have been a handful of inseparable associations of an artist with a composer: Rubinstein and Chopin, Gould and Bach, Bernstein and Mahler come immediately to mind. Another such fabled fusion was Fritz Reiner and the music of Richard Strauss. The very first recordings Reiner made at the helm of the Chicago Symphony in March 1954 were Strauss's 'Ein Heldenleben' and 'Also sprach Zarathustra'. Among the earliest of RCA's commercial stereo recordings, these interpretations are still benchmarks. Now for the first time, Sony Classical is releasing all of Fritz Reiner's studio Strauss recordings in a single box. Not only the legendary Living Stereo albums he made for RCA in Chicago, but also the far less-readily available earlier mono versions he made for American Columbia with the Pittsburgh Symphony, another ensemble he elevated to the top rank of international orchestras. Listeners will now have the luxury of comparing Reiner's multiple recordings of Strauss's Spanish symphonic noblemen: this boxset includes two 'Don Quixotes' - as impersonated by eminent cellists Gregor Piatigorsky (Pittsburgh, 1941) and Antonio Janigro (Chicago, 1959) - and no fewer than three 'Don Juans' (Pittsburgh, 1941; Chicago, 1954 and 1961). Along with all the other best-known Strauss tone poems, from 'Till Eulenspiegel' to the 'Sinfonia Domestica' and 'Death and Transfiguration', the new box also contains highlights from two great operas, featuring spine-chilling contributions by the unforgettable sopranos Ljuba Welitsch - as Salome (Metropolitan Opera, 1949) - and Inge Borkh - as both Salome and Elektra (Chicago, 1955-56). This new limited edition of Fritz Reiner's authoritative Strauss - packaged, as always, with original covers, labels and full discographical notes - deserves pride of place in any classical collection.

"These were the first stereo sessions the RCA engineers arranged with Fritz Reiner. The RCA recording team 'got it right' from the very beginning. Reiner achieves an admirable balance and whatever he does is convincing."
Rosette (Penguin Stereo Guide)