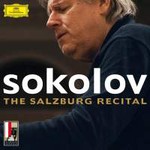 At last - after 20 years - the maestro has agreed to allow his recordings to be released on CD - now as an exclusive DG artist. Regarded as one of the world's leading pianists, and adored by his public in sold-out concerts, Grigory Sokolov is the real thing - an artist dedicated to his art, and nothing else.

"listening to Sokolov, you know unequivocally that you are in the presence of someone extraordinary, someone possessing special insights and a thoroughly individual way of articulating, clarifying and communing with music so that his interpretations seem to find its very heart." (Daily Telegraph)

"From the beginning of Mozart's F major sonata, K. 280, the first of two included, the Sokolov spell is cast. The graceful, crisp articulation; the little hesitations, so carefully wrought: here is poetic and intimate playing of the highest order." (The Times)

"An aversion to the studio makes recordings of Sokolov rare indeed - an extra reason to welcome this live recital from 2008, proof if any were needed of why the pianist is this month's Icon." (Editor's Choice Gramophone Feb 2015)

"The recorded sound is superb and immediate, with the Salzburg audience being in no way intrusive. Their enthusiasm and appreciation is suitably registered at the end of each work. The applause says it all." (Recording of the Month MusicWeb March 2015)